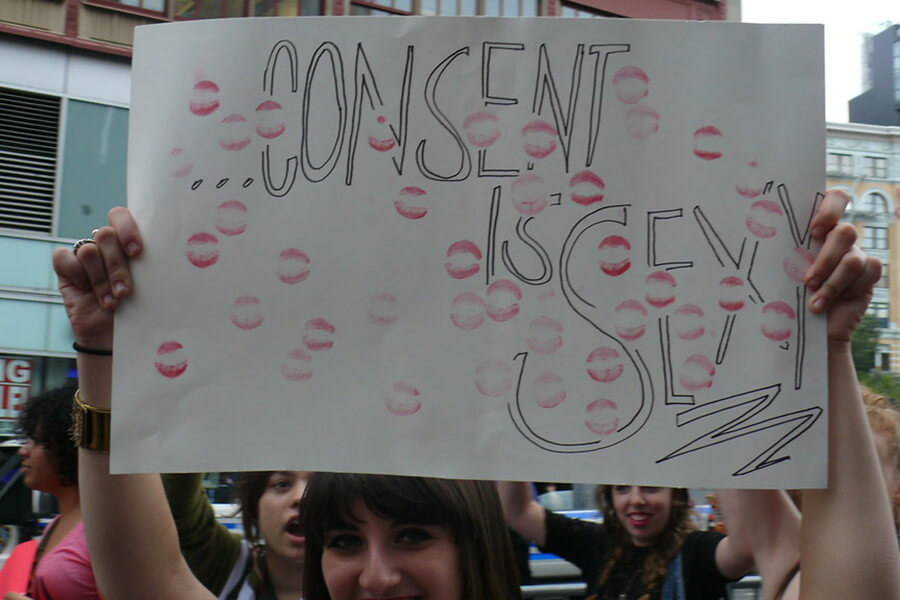 by ctrouper. CC BY 2.0
By ELLIKA GOBENA and ZARA LUNA HJELM, FATTA

FATTA! is a non-profit organisation that works against sexual violence, both in practice and legislation. In Sweden, the organisation is mostly known for its contribution to the revision of The Law of Consent. The starting point for FATTA! and the spark that ignited the consent movement began in 2013, when the Swedish rapper Nathalie Missaoui (also known as Cleo) posted a picture on Facebook of a newspaper article about a rape trial involving three men that ended in acquittal. The alleged offence was supposedly carried out using a wine bottle. Additionally, an advertisement for wine with the text ‘recommended’ was placed next to the article, which caused even stronger reactions.

After this, Missaoui, together with Ida Östensson, Vanessa Marko, and Isabel Sandblom, went to social media and asked people to send their experiences of sexual abuse, which resulted in a report with 150 anonymous stories. In the aftermath, FATTA! came in contact with professor Emeritus of Criminal Law Madeleine Leijonhufvud who had long advocated for a revision of the Sexual Offence Act, and who became the expert legal voice of the movement. FATTA! started with two aims; to advocate for a law of consent and to create a culture of consent.

THE NEW AMENDMENT, IN A NUTSHELL

On 1 July 2018, the Swedish government decided to amend the Sexual Offence Act with regard to rape. It was stated that ‘sex must be voluntary – if it is not, then it is illegal’. The previous crime prerequisites regarding violence and threat were removed and replaced with the penalty limit based on willingness. Before the law was implemented, anyone who, by assault, threat, or other forms of violence, forced another person to engage in sexual intercourse or other sexual acts comparable with intercourse could be convicted.

The legislation involved prohibiting intercourse with someone in a ‘particularly vulnerable state’, such as paralysed by fear, asleep, or intoxication. In the 2018 revision, two new terms emerged; ‘negligent rape’ and ‘negligent sexual abuse’, in which the word ‘negligent’ applies if the person committing the crime did not intend to harm the other person or was unaware that the other participant was not participating voluntarily in the sexual act. Rape by negligence refers to situations where the perpetrator realised there was a risk of involuntary sex but did not ensure whether it was voluntary or not. In other words, everything that is not a yes is a no. However, the law only applies to crimes committed after July 2018.1

CHANGING THE PERSPECTIVE ON RAPE

There have been examples of previous acquittals in rape trials, where the court based its judgment on the perpetrator’s perspective on sex, e.g. being forceful or inflicting violence as a part of a ‘sexual game’. In the new legislation, the perpetrator’s view of ‘normal sex’ and intent are no longer relevant. If there is neglect or indifference to lack of consent during the sexual act, it is now classified as a crime. Furthermore, a study2 has shown that 70 per cent of rape victims responded with tonic immobility, a state of being ‘frozen’ where they felt physically unable to resist. The new legislation defends those who have been raped without any signs of physical abuse, violence, or verbal threats, in contrast to previous legislation, which enforced and upheld outdated norms and notions. This is why the reformed Sexual Offence Act protects people by the improved protection of sexual rights and personal and bodily integrity. The reform, therefore, is creating a sexual culture built upon consent, respect, perceptiveness, and reciprocity. This is now the foundation for sex between willing partners by law.

A 75 PER CENT INCREASE IN CONVICTIONS

In 2020, The Swedish National Council for Crime Prevention evaluated the effects of the new rules,3 based on all district court sentences on rapes against women in 2019. The number of prosecutions and convictions has grown since the new legislation; up from 190 convictions in 2017, to 333 in 2019. The new offences are now being prosecuted and convicted as rape, and many of these are categorised under that new legislation, e.g. cases where the plaintiff did not react to the assault. Only 12 per cent of the new convictions are for ‘negligent rape’. The evaluation shows that there are some demarcation issues when the legislation is applied, particularly around the convictions regarding negligent rape, intentional rape, or wilful negligence.

Sweden was the eighth country in Western Europe to acknowledge that involuntary sex is rape, following Ireland, the UK, Belgium, Cyprus, Germany, Iceland, and Luxembourg. Nevertheless, the 2019 GREVIO report commended the Swedish legislation of consent as important in meeting the requirements of the Istanbul Convention.4 In 2019, a revision of the rape law in Greece was established,5 and in December 2020, the Danish parliament gave its assent to a law of consent.6