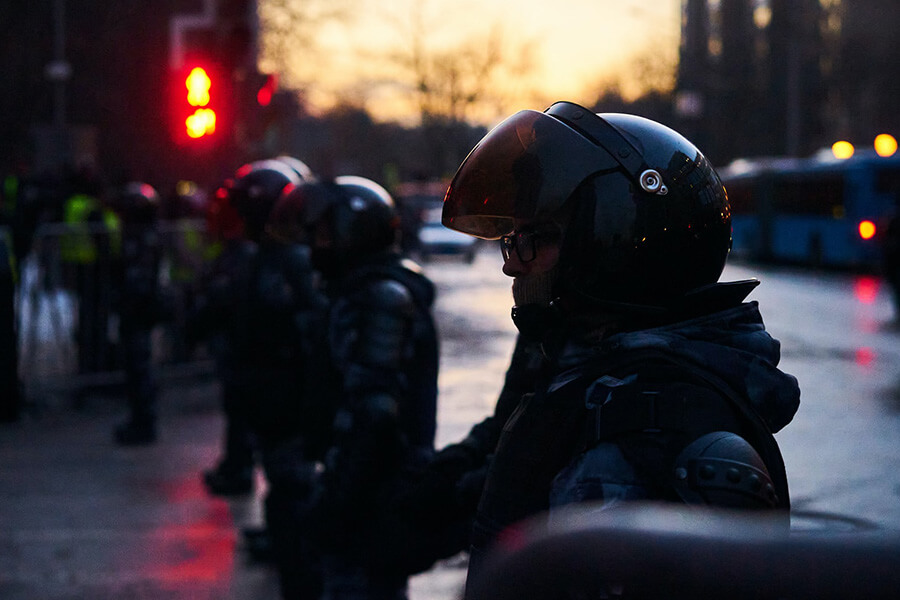 In March 2012, Vladimir Putin was elected President of the Russian Federation for the third time. The results of the elections putting Putin back into power triggered mass protests, which were then brutally suppressed.1 Since then, the Russian state has adopted repressive legislation to discriminate against human rights defenders and organisations on the grounds of foreign funding, mission (often LGBTQ+ and women’s rights), and dissent or free speech. These are often justified under a defence of sovereignty against foreign influence.

As tight as Russian regulation of NGO activities and freedom of expression currently is, it stands to toughen further if the planned changes are adopted after the State Duma elections in 2021.

DISCRIMINATION ON THE BASIS OF FOREIGN FUNDING

This shift began in July 2012 with the introduction of a new status of ‘Non-Commercial Organisation Performing the Function of a Foreign Agent’ (Foreign Agents Law).2 NGOs engaged in political activities in Russia and receiving foreign funding now needed to register on a ‘foreign agents’ roster and periodically submit reports on their sources of income and activities. Non-compliance with the obligations has led to administrative3 and criminal liability.4

There have been two cases of criminal prosecution: Valentina Cherevatenko, chair of Women of the Don, and Alexandra Koroleva, director of Ekozaschita!. In June 2017, Cherevatenko was charged with “malicious evasion of duties imposed by the law on non-profit organisations performing the functions of a foreign agent”.5 The charges were dropped a month later.

Alexandra Koroleva was charged with “malicious non-execution by the head of organisation of a court sentence” in May 2019.6 The court found Ekozaschita! to be non-compliant with reporting obligations under the Foreign Agents Law and imposed fines amounting to more than 2,000,000 rubles (EUR 22,500). Koroleva left Russia and was granted political asylum in Germany.7

More restrictions followed in 2014 and 2018.8 9 10 Nowadays, the Ministry of Justice puts all NGOs critical of the authorities onto a register, made possible due to a ‘very broadly construed’ definition of ‘political activity’.11 Burdensome reporting obligations, large fines, and even the term ‘foreign agents’ itself, which has negative connotations in the Russian language,12 resulted in the liquidation of many NGOs by their own decision13 or by a court decision. 14 There has been some pushback domestically and from organisations such as the United Nations Human Rights Committee,15 but these efforts have all been defeated in the domestic courts,16 including the Constitutional Court.17 However, a decision from the European Court of Human Rights (ECtHR) is still awaited.18

In 2015, the Prosecutor General of Russia received the power to declare a foreign or an international organisation ‘undesirable’ if the latter “presents a threat to national security.”19 This, and other amendments, caused a significant decrease in the financing of NGOs in Russia.20 The roster of undesirable organisations now lists 29 organisations, including the Open Society Foundation, the National Endowment for Democracy, and the European Endowment for Democracy.21 All three have stopped their grant programmes in Russia.

In November 2017 foreign media organisations receiving foreign funding were obliged to go on a register and mark their publications as being produced by a ‘foreign agent’.22 The roster currently includes 11 mass media organisations.23 This was followed, in December 2019, by a decree that individuals were obliged to register on a ‘foreign agents’ mass media roster if they participated in the creation or publication of ‘foreign agents’ mass media, along with receiving direct or indirect funding from abroad.24 Although no one is yet included on the register, as one report noted, the amendments “substantially limit the diversity of media sources in a manner that is disproportionate to any legitimate aim.”25

This tide of legislation has not abated. In November 2020, two bills were introduced to the State Duma, intending to further hinder the work of human rights defenders and organisations. The first,26 introduced by the Cabinet of Ministers of the Russian Federation, broadens the definition of foreign funding and obliges NGO-foreign agents to submit their project activities to the Ministry of Justice.27 They face liquidation if they perform activities planned without the prior authorisation of the Ministry of Justice. The second bill was introduced by deputies of the State Duma and senators of the Federal Assembly.28 It proposed to register unincorporated associations and people receiving foreign funding on the ‘foreign agents’ roster.

DISCRIMINATION ON THE BASIS OF A FIELD OF WORK: LGBTQ+ AND WOMEN’S RIGHTS

Since 2006, the Russian Federation has started to adopt laws banning ‘gay propaganda’.29 In July 2013 ‘promotion of non-traditional sexual relations to minors’ was prohibited on federal level.30 In response, the United Nations Human Rights Committee regards these laws as “exacerbat[ing] the negative stereotypes against LGBT individuals and represent[ing] a disproportionate restriction of their rights.”31 Under these laws, human rights defenders has been persecuted for awareness-raising and educational projects among young people. In January 2015, Elena Klimova, who organised the project Children-404, which aimed to support LGBT teens, was fined for ‘gay propaganda’.32 LGBT activist Julia Tsvetkova was fined under the same charges in July 2020.33
Generally, LGBTQ+ people face unpredictable law enforcement and absurd charges. As victims of ‘honour killings’ and torture in the North Caucasus, they receive no protection.34 They are also denied the right to peaceful assembly. In October 2006, the mayor of Moscow refused to hold a gay pride event because such assemblies were viewed as promoting homosexuality.35 And, in October 2020, the persecution of single gay fathers, who used the services of surrogate mothers, was widely reported. A representative of the law enforcement authorities was reported as saying: “The men, in accordance with the law, could not be donors through in vitro fertilisation, since they have a non-traditional sexual orientation. They might be charged with human trafficking.”36

Women are another group facing continuous discrimination and violence, and for whom the situation has worsened in recent years. Gender stereotypes are widespread,37 and the protection of ‘traditional family values’ was even inserted into the recently amended Constitution of the Russian Federation.38 Women are underrepresented in decision-making positions in political and public life.39 Russia is 122nd in the Global Gender Gap Report 2020.40 The situation improved slightly with the decision of the Committee on the Elimination of Discrimination against Women committee,41 which led the list of forbidden jobs for women being reduced from 400 to 80 positions.42

Honour killings still occur in the Northern Caucasus43 and domestic violence is also mostly unpunished across the state.44 In 2017, the first offence of domestic violence not leading to physical injury was decriminalised.45 This raised concern among UN treaty bodies,46 lawyers, and human rights defenders.
Despite the flaws in regulation and enforcement, the law on domestic violence has still not been adopted.47 Meanwhile, applications concerning police failure to respond to domestic violence have been submitted to the ECtHR.48 That Court has already reproached Russian authorities for failing to adopt legislation to combat domestic violence, saying the failure is due to “reluctance to acknowledge the seriousness and extent of the problem of domestic violence in Russia and its discriminatory effect on women.”49

Journalists, activists, and human rights defenders have been intimidated, harassed and killed without repercussion.50 In 2010-2013, the political speech of artists was persecuted under laws governing hooliganism.51 In June 2013, Article 148 on Protecting Religious Convictions and Feelings of Citizens Against Insults was added to the Criminal Code of the Russian Federation (CC RF).52 Several criminal cases followed, receiving international attention for their disproportionality.53
The notoriously high number of criminal persecutions for political speech has been caused by the legal enforcement of Article 282 of the CC RF on incitement of hatred or enmity. Partial decriminalisation of Article 282 has not improved the situation, as new articles to the CC RF have been introduced that enable law enforcement officials to continue silencing critics of the regime.54 These and other developments, according to the United Nations Human Rights Committee, “separately and jointly create a substantial chilling effect on freedom of speech and expression of dissenting political opinions”.55

Suppression of freedom of speech is a part of state politics of memory. There is one official version of the past.56 It is promoted with ‘patriotic education’, criminalisation of discussion on the role of USSR in the Second World War,57 and limited access to archives.
These have been made possible through a series of laws and developments at the centre of the state. In October 2012, the President created a special Department charged with youth policy and patriotic education. 58 This was followed, in 2016, by a State Programme on Patriotic Education.59 According to the State Programme, the Ministry of Defence is one of the main ministries responsible for its implementation. For instance, the Ministry of Defence created the ‘public movement’ ‘Yunarmia’,60 which recruits 11-year-old schoolchildren to participate in re-enactments of Second World War battles.61 International experts find such significant involvement of the Ministry of Defence in youth education worrying. 62

The law criminalising, inter alia, distortion of the Soviet Union’s role in the Second World War, was signed by the President on 5 May 2014.63 Investigative bodies do not take into account the aim and context of the actions that allegedly distort the role of the USSR, which leads to absurd charges.64 The law raised concerns from the UNHRC.65 However, in October 2020, President Putin publicly supported a proposal to criminalise comparison of the role of the USSR and fascist Germany during the Second World War.66

These laws prevent free discussion of the past. Another obstacle is limited access to archives. In Russia, unlike Ukraine and Baltic countries, documents and court cases related to the time of repressions in the USSR are not made public.67 This limitation poses obstacles for historians and other people trying to seek information.68

State authorities are given the right to interpret the past. Consequently, they believe it gives them the right to decide Russia’s present and future. Any dissent is labelled as traitorous and defamatory to the memory of ancestors.69 All those who disagree are prosecuted and persecuted.