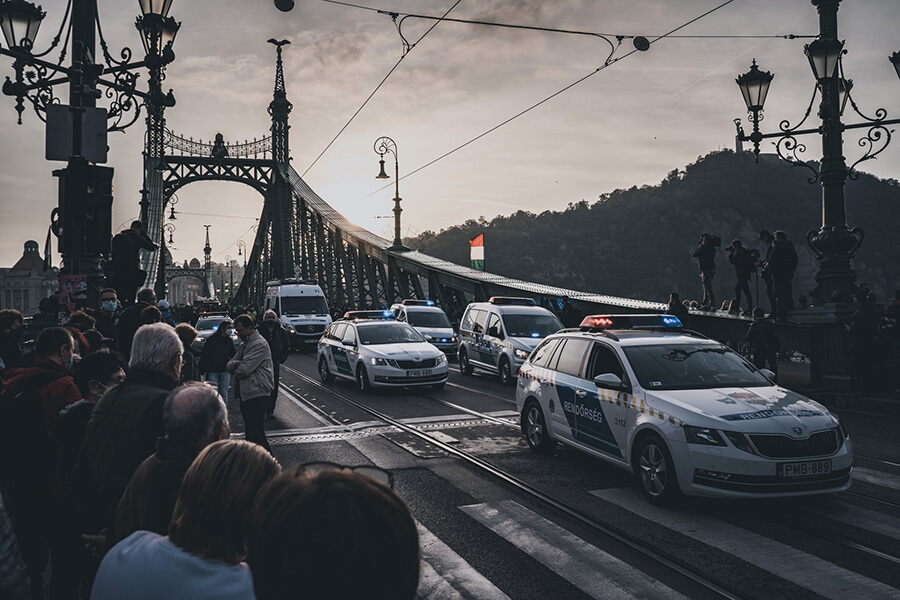 The Hungarian government, with the backing of a two-thirds supermajority in parliament, has disregarded limits on its powers for over a decade. To do so, it has systematically undermined constitutional checks-and-balances by restructuring and re-staffing these supposedly independent institutions.1

After the refugee crisis of 2015, non-governmental organisations (NGOs) critical of the government have been targeted by the state’s overwhelming propaganda machinery.2

This has happened in a number of ways. Firstly, due to the government’s anti-migrant stance, NGOs and their volunteers have been characterised in political discourse as ‘enemies of the state’. Between summer 2013 and spring 2014, government officials openly stated that NGOs were “political activists paid by foreign interest groups”, were on “foreign payrolls”, and “[wished] to influence Hungarian life in certain moments and with regard to certain issues”.3

The government then began to apply a toolbox of powers and instruments. In May 2014, the Government Control Office began an audit of organisations administering the EEA/Norway Grants NGO Fund and their grantees. It has been tasked with managing the funds allocated to NGOs in Hungary through the EEA and Norway Grants. Numerous NGOs critical of the government have also received funding. In September 2014, The offices of two organisations administering the Norway Grants NGO Fund were raided by police. No evidence of illegality was revealed.4

In 2017, a law5 was introduced that smeared Hungarian NGOs by requiring them to declare themselves ‘foreign-funded organisations’ if they received at least €22,000 a year from sources outside of the country. The Court of Justice of the European Union would later rule that this was in breach of EU law. Since then, the government has done nothing to respect that court’s ruling and has instead ignored it. Recently, a government-established public foundation, Tempus, rejected an NGO’s EU grant application from the Power of Humanity Foundation (Emberség Erejével) over non-compliance with the impugned legislation. 6

In 2018, the Hungarian parliament passed a series of laws that criminalised any individual or group that offered help to asylum seekers.7 This legislation restricted the ability of NGOs to act in asylum cases, and was passed despite protest from the European Union and human rights groups. Under the law, officially called ‘Stop Soros’, individuals or groups that helped illegal migrants gain asylum in Hungary could be punished with imprisonment.

In November 2019, the Supreme Court of Hungary ruled on a 2017 ‘national consultation survey’ (a direct marketing campaign of letters sent to every Hungarian household), which contained false allegations about the Hungarian Helsinki Committee. The Supreme Court ruled that the government had damaged the NGO’s reputation and ordered the Office of the Prime Minister to pay 2 million Hungarian Forints (about USD 6,500) in damages.8

In 2020, prior to the Covid-19 pandemic, government rhetoric in this area became even more hostile. The Hungarian Helsinki Committee was attacked for exercising a right provided to NGOs by the rules of the Committee of Ministers for the supervision of the execution of judgments. A new term, ‘prison business’, was introduced. On 15 May 2020, the Secretary of State of the Justice Ministry said: “[The] prison business is the business of pseudo-civil rights defenders and lawyers, most of whom can be clearly linked to the political left and Soros-organisations […] This [Rule 9] submission was obviously written so that their master [reference to George Soros] would stroke their little heads [...].”9

It is in this atmosphere that, by 2020, our NGO with 35 staff members helping several thousand people a year has come to be considered an enemy of the state.

Figyelő is a magazine that forms part of the government’s propaganda machinery. In 2018, I was listed, alongside many experts, as a ‘mercenary’ of George Soros and an enemy of the state serving foreign interests.10 I am proud to be on that list alongside lecturers at the Central European University and other NGO staff for organisations such as the Hungarian Helsinki Committee, Amnesty International Hungary, and Transparency International. I am in the company of those devoted to academic research, education, and the protection of human rights.