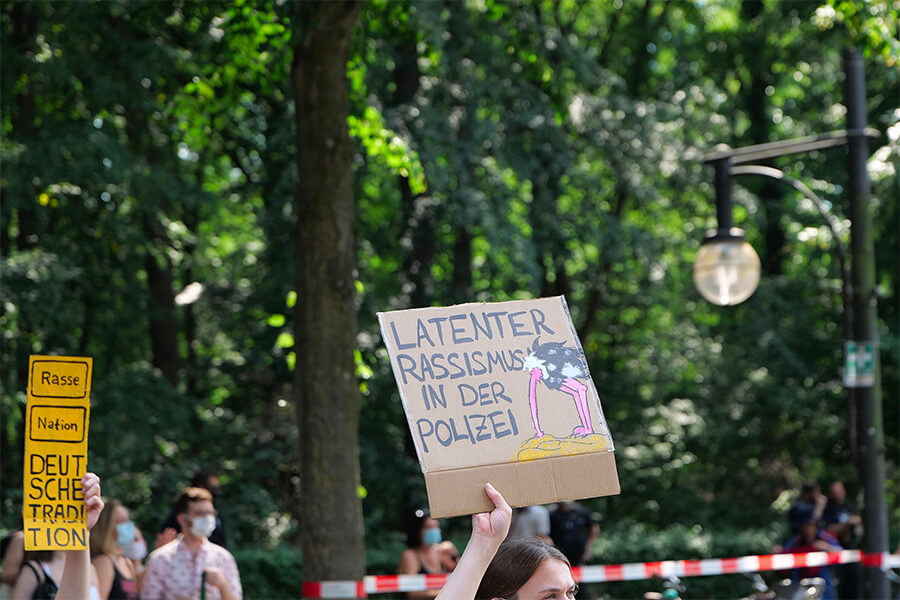 In April, Legal Dialogue Playbook spoke to Bund für Antidiskriminierung und Bildungsarbeit (BDB) project manager Dr Melisa Salazar about new antidiscrimination legislation introduced in Berlin. Salazar, originally from the US, has been working with the BDB since 2012 after training as a sociologist and ethnologist.

The BDB is an NGO that works against racism and other forms of discrimination, focusing on training, political work, and counselling. Salazar says that the BDB began working with the Berlin police and the Green Party in 1996 and 1997 to educate officers on race relations. In 2015, the two sides parted ways due to internal shifts within the police’s structure. According to Salazar, this was precipitated by an incoming police chief’s attitude to the issue of racial profiling, and their focus on Islamism, which was very different to the approach of their predecessor.

Legal Dialogue Playbook: What is the current state of relations between the Berlin police and people of colour?

Dr. Melisa Salazar: I think the police have become more aware that they are being watched, but this may have made them more defensive. Knowing that you’re being watched makes you more careful and reflective, but it does not come without resentment. Nobody likes to be watched. Some of the officers are more reflective about relations; racial profiling was so normalised before that they did not have to think about it.

LDP: Is the problem with individual police or is it wider and more deep-rooted?

MS: There are plenty of nice policemen. But the problem comes with the structures that they work in. One thing we picked up from the police trainees is that their supervisors would justify focussed controls on particular groups, saying that that’s how these people are, that that's what they'd seen in their work. It’s this blind spot where you’re seeing the same things time and again as part of your job looking for criminals so you don’t see what else is out there.

LDP: What does that mean?

MS: There are people who act in criminal ways in every group, and if you are always focusing on certain groups of people, you’re going to see the criminals in that group. But it becomes hard then to separate that community group from that minority of criminals within it. And that’s especially so if that’s the message that you’re always getting from your superiors: that this group is criminal. Even if people are going in with the knowledge of all these human rights laws and reflections from the training we’ve done with them, they’re going into a structure that then tells them the opposite.

LDP: What sorts of profiling have been typical in Berlin?

MS: There are some people in the city that feel that they’re going to get stopped by the police if they go through Gorlitzer Park [a fairly notorious spot in Berlin for drug dealing] Even if they’re being stopped and no overt harm is done, it’s still something that these people factor in when thinking about how much time they need to get somewhere. There’s no leaving at the last minute. And if it happens often enough, anger can arise. The police have learned to take control in situations like that. And if things go really wrong, it’s not the police who are going to suffer in the end.

MS: It is. And it’s a waste of time, resources, and energy, since the police are taught for two and a half years to look for signs of criminal behaviour and then they are told to forget this training and rather to do routine checks on everyone in a group, regardless of suspicious behaviour. It’s really demeaning and dehumanising for those being stopped. Other people pass by and think that they’re being controlled for a reason. Being looked at with such suspicion does something emotionally to people.

LDP: What’s your opinion on the antidiscrimination laws?

MS: I’m not a law expert so it’s not easy for me to see where the problems are. But I do think the new Berlin Antidiscrimination Law is a step in the right direction. The reality of how effective it is in helping us fight discrimination is often affected by how particular terms in the law are interpreted. We won’t know enough until we see how these laws are interpreted in concrete court cases.

LDP: Is there anything in particular that you like?

MS: One thing I do like about the Landesantidiskriminierungsgesetz [the anti-discrimination measures put forward by the city] is that they say that the person affected has one year to bring this into the open, as opposed to two months. Racial profiling happens regularly and when it does go to court, it’s because it went too far one time. The victim can be too traumatised emotionally to deal with it quickly. They’re often scared or afraid that nothing will change. So I’m glad it’s been extended to a year so that organisations and NGOs have more time to bring something to court.