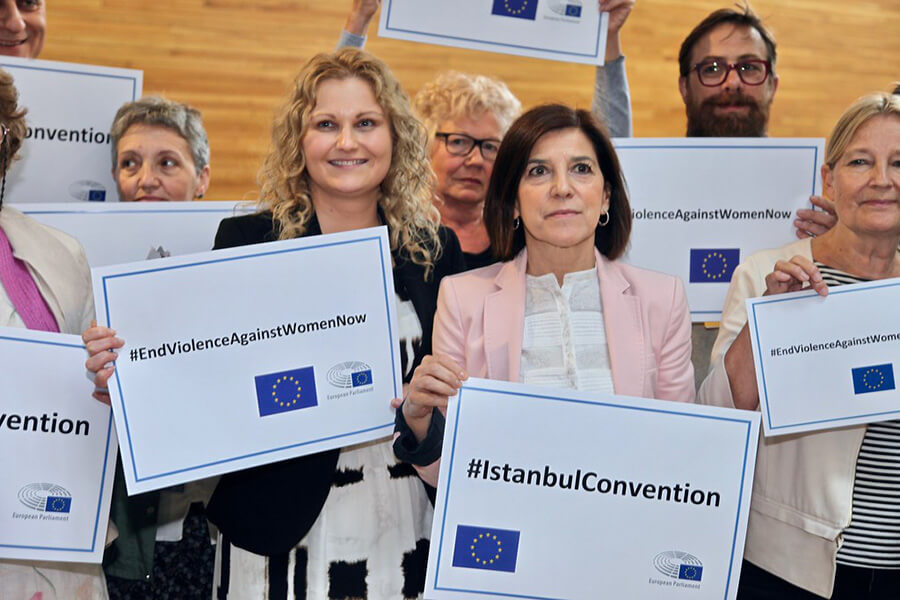 The world is a very different place in 2021, ten years after the Istanbul Convention was first signed. In 2011, when the ink was still wet, the world had yet to see or even anticipate the #MeToo, #TimesUp, or #SpeakingOut movements. This explosion of accountability has become a wellspring of stories about those who have abused power and their victims. But while much has changed, not all of it has been for the better.

According to the Council of Europe, the Istanbul Convention remains unsigned by Russia and Azerbaijan, and unratified by Armenia, Bulgaria, the Czech Republic, Hungary, Latvia, Liechtenstein, Lithuania, Moldova, the Slovak Republic, Ukraine, and the United Kingdom. Even worse, Poland and Turkey have said that they will withdraw from the convention, while Hungary has also signalled its intention to do so. Meanwhile, the constitutional court in Bulgaria has declared the convention unconstitutional.

However, across Europe there have been numerous advances in women’s rights.

Many countries have moved forward on redefining rape as needing affirmative consent. Sweden was the eighth country in Western Europe to acknowledge that involuntary sex was an offense, following similar moves in Ireland, the UK, Belgium, Cyprus, Germany, Iceland, and Luxembourg. Similar work on sexual offenses law was carried out in Greece in 2019 and Denmark in 2020. In addition, multiple laws around ‘upskirting’ have entered the statute books in Germany, Scotland, Finland, England, and Wales. Meanwhile, in 2018 France began issuing fines under a street harassment law to combat catcalling, obscene gestures, and sexual propositions.

There has also been progress on abortion rights in countries such as Ireland and Spain, which have either legalised the procedure or removed some of the barriers to it. The two countries also brought in landmark domestic violence regulation in 2018, moves that were followed by Croatia and Italy in 2018, and Romania in 2020.

But in other countries, particularly Russia, the cause of women’s rights has taken backward steps. In 2016, domestic violence was decriminalised there amidst arguments about Western incursions on ‘traditional’ and ‘family values’. Similar arguments have been made in Poland and Hungary, and there are tensions between the countries committed to the Istanbul Convention and the influence they can realistically wield.

The story of the Istanbul Convention is still being written. While it was drawn up in good faith, it has run into the business of realpolitik. The end result is not yet known but it seems that while some battles have been won, the war goes on.