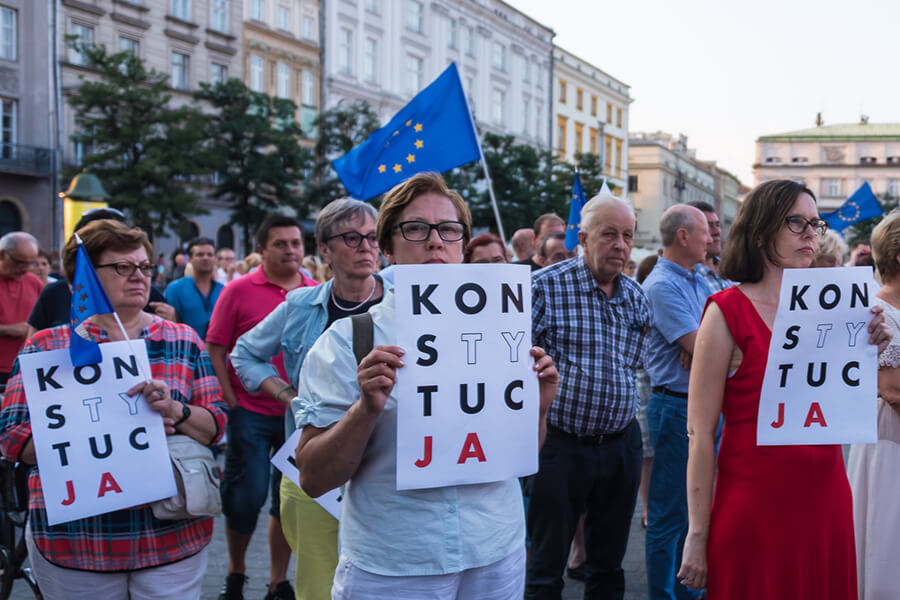 Poland’s civil society is vibrant and diverse, reflecting the depth and variety of political discourse within the nation.1 Much of this is underpinned by a variety of non-governmental organisations (NGOs) working across a broad spectrum of critical social and political topics and themes.2 However, the United Right coalition, which came into power in 2015, has systematically undermined the quality of democratic governance, the electoral process,3 judicial independence,4 media freedom,5 freedom of assembly,6 and freedom of expression.7 It has also conducted smear campaigns against judges, 8 the LGBT+ community,9 and worked to further restrict women's reproductive rights.10 All these negative trends, which predate the COVID-19 pandemic, have continued throughout 2020 and into 2021.11

These assaults on democracy and human rights have forced NGOs, social movements, and independent media into a defensive position.12 But, as a consequence, these actors are portrayed negatively in government-controlled state media as well as in pro-government private media, which is heavily subsidised by state-owned companies.13

The government has centralised the distribution of state funding to NGOs and attempted to limit certain NGOs’ operational capabilities by means of cuts to state subsidies. Notably, since 2016, the government has defunded organisations helping victims of domestic violence, migrants and refugees, and certain cultural journals promoting liberal and leftist opinions.14 The National Freedom Institute–Centre for Civil Society Development has been responsible for administering state funding to NGOs since 2017, focusing on projects related to national and religious heritage.15

Since 2018, concerns have been raised over how the Justice Ministry distributes money from the Justice Fund that is supposed to support organisations helping victims of crime. The funds are instead often channelled to organisations with no experience in this area, but with political connections to politicians from the ruling coalition.16

Aside from state funding, Norway and EEA Grants are important sources of funding for NGOs in Poland. They are a form of development aid from Iceland, Norway and Lichtenstein to support resilience in civil society (EUR 800 million from 2014-2021). In 2016-2019, the government attempted, unsuccessfully, to take control of the distribution of these funds.17 Against this increasingly difficult landscape, some NGOs, such as the Campaign against Homophobia, the Women’s Rights Centre, and OKO.press, have successfully launched their own crowdfunding campaigns.

Certain NGOs’ rights around accessing schools have been limited, and this seems to be targeted at those working on issues of the rule of law, immigration, women’s and LGBT+ rights, and sex education.18 This has also extended beyond mandatory education: in 2020, the Science and Education Minister warned that state research funding might be withdrawn from universities for enabling students to participate in nationwide protests against new abortion laws.19

The government has also sought to attack the NGO sector, weakening it in terms of funding. In 2020, it announced work on legislation obliging NGOs to disclose any funding from abroad exceeding USD 4,000 per year, excluding funding from the European Union and international organisations. A register of foreign-funded organisations was also set to be established, mirroring legislation in Russia and Hungary.20

In 2019-2020, the ruling coalition maintained its grip on power, winning general elections and the presidential vote. The next general elections are planned for 2023. However, the government’s often-chaotic response to the COVID-19 epidemic, its economic fallout, and non-pandemic-related curbs to the rights of individuals have provoked the biggest anti-government protests since 1989. New bottom-up initiatives advocating for the rights of women and minorities have mushroomed in response to the government’s radical policies. A government-led pushback against these rights, alongside polarising state propaganda, have paradoxically reinvigorated and strengthened the work of NGOs in Poland. The future of this work now depends on the ability to secure sufficient local and international funding, as well as on expanding independent networks in Poland and Europe that will help it weather vicious attacks.